A specially commissioned new drama by Tama Matheson in which Beethoven drops in on pianist Piers Lane as he is about to embark on performing, for the first time, the complete cycle of all 32 Beethoven piano sonatas.

Tickets available from 2 October at the following link:

Renowned for their performances together of Beethoven’s complete works for cello and piano, Raphael Wallfisch and John York delve through these masterworks to discover the genius behind them.

Tickets available for the online performance on the following link from 2 October.

Harrogate International Festivals virtual arts weekender, featuring a range of musicians, authors and other figures ran from 23-26 Julyand included music from cellist Steven Isserlis, violinist Tasmin Little, the Navarra String Quartet and jazz bassist Misha Mullov-Abbado, the latter of whom will Guest Curate the festival and appear as part of the Mischa Mullov-Abbado Group.

Tickets to see and hear this performance online may be purchased for £15 for the whole household at the following link:

September: Listen Again to Tasmin Little’s interview with BBC Radio 4 “World at One”

Tasmin’s interview with BBC Radio 4 “WORLD at ONE” reminiscing about her past BBC Proms performances was broadcast earlier this month.

Now available on LISTEN AGAIN if you scroll forward to 37min:45sec. 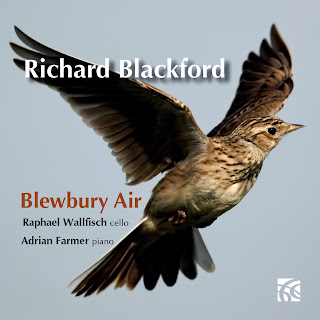 On 5 June 2020, cellist Raphael Wallfisch and pianist Adrian Farmer performed at Wyastone Studios, home of Nimbus Records. It was the first time the two had been able to play together since lockdown. The work they were performing was for a new recording, of Richard Blackford‘s Blewbury Air, and the recording has now been released on the Nimbus Alliance label.Richard Blackford describes Blewbury Air as a love-song to the village of Blewbury in Oxfordshire, which is where Blackford lives. Lasting around 12 minutes, the three movement work is explicitly descriptive and each movement has an evocative title, ‘By the water’s edge’, ‘Incantation with bells’, and ‘The wind in the branches’, and they reflect Blackford’s intention to depict the lake near his house which teems with wildlife.

The first movement starts of vividly passionate, with a strong cello melody giving plenty of scope for Wallfisch’s singing tone. Later the movement dies away but keeps the cello in focus. In form, it is a rondo, but Blackford transforms his material thus holding the interest. The second movement starts with a striking moment for solo cello, before the piano comes in with the evocative bells of the title. Blackford alternates these two, rhapsodic cello and bell-like piano, developing them and making them interact and creating quite a stir before evocative calm is restored at the end. The short finale is fast and not a little furious,

We caught the London premiere of Richard Blackford’s Pieta in October 2019 [see my review]. Blackford is an interesting composer. Born in 1954 he is one of a generation who trained in modernism (Blackford was, for a period, assistant to Hans Werner Henze) but turned their back on it and moved into other areas, and whose more traditional compositional voice has emerged more slowly. Blackford has a significant catalogue of film, TV and theatre work, but more recently has concentrated on concert music, creating a distinctive voice with remarkable success.

This new piece is tonal, yet full of interest and finely constructive. Its length makes it a prime candidate for recitals.

The recording is available direct from Nimbus, and the printed music is also available for purchase from Nimbus Music Publishing.

Hugh Canning
Sunday August 30 2020, 12.00pm, The Sunday Times
….My weekend’s highlight, inevitably, was Little’s pairing with Roscoe of Brahms’s C minor sonata, his last, with César Franck’s masterpiece, the sonata in A major, written in 1886 for his compatriot and contemporary, the father of the Belgian violin school, Eugène Ysayë. Their Brahms — written around the same time, between 1886 and 1888 — is always rewarding, spacious, broadly conceived and imbued with an impassioned turbulence in the virtuoso, tarantella-like finale, a stark contrast after the gentle song-like lilt of the D major Adagio cavatina.

Franck’s work has become something of a party piece for Little and Roscoe, the violinist at the peak of her form, notwithstanding her (now delayed) intention to retire at the 2020 Proms, and the pianist dispatching the fiendish keyboard part with breathless élan. Both conveyed the restless eroticism of a composer who, near the end of his life, had not yet recovered from his youthful encounter with the intoxicated chromaticism of the Venusberg music from Wagner’s Tannhäuser.

If Little, when she finally retires, goes out on this kind of form, she can be well pleased with her decision. She remains our most versatile violinist, always a searching and fresh interpreter of the most familiar scores….

5 star Review for Tasmin Little and Piers Lane ‘Little and Lane steer a fine series to an equally fine conclusion.’

Little and Lane steer a fine series to an equally fine conclusion.
by Brett Allen-Bayes on July 27, 2020
*****

In this, the third and final instalment of an excellent series devoted to 20th-century British chamber works for violin and piano, the very fine violinist Tasmin Little has chosen to farewell with a lesser-known selection of works than in her previous instalments. Little has always been an enquiring musician who is always up for a challenge as those who have attended her local concerts will attest.

Those concerts have also attested to her love of British composers. Now considering retirement from the stage, Little has chosen to consolidate that love with a triptych of fine albums featuring the sympathetic pianism of Piers Lane – and here is a true partnership, rather than violinist and accompanist, as they set out to present rarer choices for the third album in this important set of recordings.

Firstly should be noted the world premiere recording of The Hart’s Grace (2016), a work of “dreamy intensity” written especially for Little by the contemporary composer, Francis Brown. Each of the three central works in this recital have had troubled histories and have remained underappreciated. Alwyn’s early Sonatina was disowned by the composer as juvenilia and yet has thankfully survived to receive this gracious performance. Similarly, York Bowen’s work remained little-known or appreciated until a couple of decades ago; and here he’s represented by his sonata, Op. 112, an intense and perhaps rather neurotic work from the 1940s. This contrasts well with Ireland’s Second Sonata, dating from the troubled 1910s.

These works are ideally suited to a player of Little’s character and commitment, and Piers Lane only adds to this intoxicating and often almost febrile mix.

All of these choices offer much to show the talents of these musicians, for Little is a giving player with a a passionate style and an enquiring mind; the perfect foil lies in her choice of pianist, Piers Lane and hopefully together the two of them, with this excellent recording, can re-present this overlooked music to an appreciative public. Now, can Chandos please release all three volumes as a set?

A huge thank you to the Harrogate International Festival for being so innovative and supportive to musicians with their programming. Forced to cancel this year’s live festival due to Covid-19, they galvanised into action and moved to a virtual platform.  In doing so they have given musicians and performers an opportunity to perform and receive an income.
Tasmin Little’s performance can be viewed this coming Sunday free of charge and there are many many other performances available from today.
More and more festivals and concert halls are turning to recorded events to help musicians through this period and to bring us music. A big shout out to all of them.  Bravo.